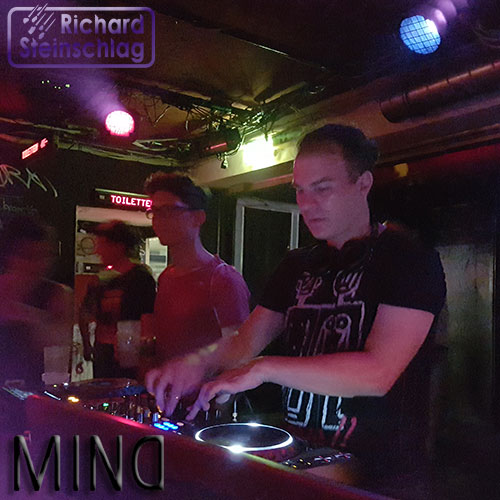 Richard raised up in Vienna and Lower Austria. First contact with electronical music was the first visits with an age of 14 in Vienna recordstores. And then going out in the discotheks, surprised to hear not the modern music like acid house or techno in the end of the 80s. Parallel he started to produce songs with several software programs on Amiga 500 and later on a pc.

1999 after a long raving period and being / living every weekend in the Vienna techno scene he started with friends the “Brainfuckproject” as a controversial soundsystem art project, influenced by Ilsa Gold and Spiral Tribe. And did several liveacts as “NC Joe and Martins696” or as “The Vienna Brainfuckproject” in scene parties in and around Vienna. They were the first collective played digital and strictly only own completely selfdesigned tracks and loops on 4 decks, hard mixed, and nothing else since the year 2000.

After 2006 he had some bookings as “Krischan777” with Dance, Worldhouse and the upcoming Electroswing. Experimenting with 432 Hertz Music and golden ratio in music (look at www.mindloveproject.net search for 432)

2009 He startet the artist project “Richard Steinschlag” and went back into Techno more as a dj with few own new songs, now Minimal Techno and Electronica.

2012 He created the “Mind Entertainment” Project with Events from Breclav (CZ) to Camera-Club including the underground festival serie “Electribe” at Castle Valtice.

2015 Raising up the Kulturzentrum “Schmelze” to a small underground venue and experimental testroom for DJs and Liveacts. His roles? Resident DJ, Technician, Eventmanager, Location Co-Host, and more.

His soundstyle become again unique and more modern with excessively using the Remix Decks from Traktor DJ Studio for live remixing everything live to “Steinschlag Techno”.

2016, now, he is producing new material & playing several gigs in austria and czechia and still like to work in this electronical dance scene.